Vacation time is precious and it is usually well planned out for herping fanatics.  As herpers we generally organize our trips around the weather, the season, and the moon phase.  As a professor I have to plan my vacations around semester dates so I am limited for travel between September and May.  I have had to miss some really important herping trips because of my teaching schedule.  Nevertheless I put a lot of effort into planning most of my vacations around herping.  Other travel obligations, however, creep in from time to time.  One example is the traveling my husband Bill and I have had to do to attend family weddings over the last several years.  Since these family gatherings are important to me I do everything I can to make sure that I don’t miss them.  At the same time though I make it a point to find time to go field herping… if at all possible.  When I pack for these out of state weddings my field hook goes right next to my required wedding attire in the suitcase.

In 2008 I flew home to Massachusetts to attend my cousin Becky’s wedding.  Her wedding started late in the afternoon so I spent the morning of the wedding wandering around one of my favorite spots.  I was so happy to be herping in my hometown that I quickly lost track of time.  I was finding garter snakes (Thamnophis sirtalis) and beautiful painted turtles (Chrysemys picta).  When I realized how late it was getting I put down my last garter snake and rushed home to get ready.  By the time I made it to the venue Becky and her new husband were walking down the aisle as husband and wife.  Uh-oh, I thought, I’m in big trouble now.  I missed the most important part!  I’m pretty sure my aunt has not completely forgiven me yet for showing up after my cousin and her new husband exchanged their vows.

In 2012 I flew to Texas for my brother in law’s wedding.  My husband Bill was able to schedule a week off from work so he went to Texas earlier and spent his time in and around Big Bend National Park.  As badly as I wanted to be in Big Bend I couldn’t leave because it was the middle of the semester and I had teaching obligations.  So, when I arrived in Texas – for the weekend of the wedding only – I had a one track mind: herps.  I had been getting phone calls and picture messages from Bill all week detailing the amazing herps he found.  He had a productive and enjoyable week in Texas.  I was ready to grab my camera and make a run for it.  But, there were so many family obligations that I couldn’t get away.  Finally, on the day of the beautiful outdoor wedding I spotted some bright green anoles (Anolis carolinensis).  I have always loved green anoles, but under normal circumstances I may have barely noticed them since they are rather plentiful where I live in Florida.  I was, however, really excited to see the lizards in this case.  I couldn’t help myself – even in my dress and heels – from chasing and catching the lizards.  I’m not sure I made the best impression on my husband’s family… but I needed photos of those green anoles because I simply could not leave Texas without finding and photographing any herps. 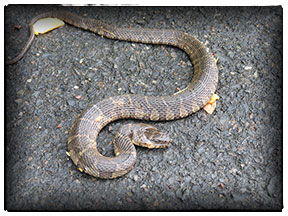 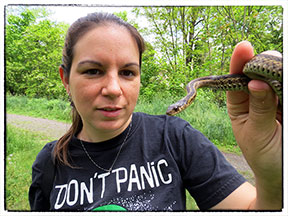 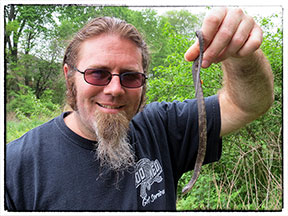 Three weeks after I returned from the wedding in Texas I had a wedding to attend in Pennsylvania.  This time it was my best friend’s wedding and I was a bridesmaid.  Luckily Lisa’s wedding was in May and I was able to leave for Pennsylvania the day after I submitted final grades.  This meant that I had no direct incentive to hurry back to Florida.  So, Bill and I stayed in Pennsylvania for a week and herped to our heart’s content.

Many years ago Bill lived in Pennsylvania.  But, we were staying near King of Prussia which is several hours from the area Bill lived in.  In addition, it was only my second time in the area.  As a result we did not know where to look.  When this happens the best advice I have – and I say this over and over again – is to explore.  Bill likes to use Google earth to find new herping spots.  While that seems to work really well for him I prefer just taking off and investigating the area.

I get emails all the time from people who are not from Florida asking for locations.  These people see my herping photos online and they email me asking for specifics about those locations.  Though I feel a strong sense of herp inspired kinship with the authors of these emails I do not offer specific information to people I have not met.  One reason is that I don’t know what agenda the person writing has for the herps he or she finds.  Will they exploit the area by over collecting?  Will they tell everyone they know? What if they damage the habitat by pulling bark off trees, for instance?

A few years ago I received an email from a network trying to produce a show called From Enemy to Eaten.  As far as I know this show never came to fruition.  The idea behind it was to go herping in Florida and find invasive species (the “enemy”).  The herps would then be collected and taken to local chefs who would, in a competition of sorts, prepare them as food (the “eaten” part).  This is not something I am comfortable with as I believe it adds to the negative shock value of herpetoculture.  This is another reason I don’t feel comfortable providing location information to strangers.  It is possible they are working for something that I do not agree with.  In the absence of friends or colleagues familiar with the area I believe it is best to explore.

While in Pennsylvania, we started by exploring the property around our hotel.  It turned out to be a great area.  We walked through the woods and came out in a sparsely populated neighborhood on the other side of the hotel.  It was a very chilly day and the temperature did not climb past the low 60s.  I was not expecting to find too many snakes, however, we quickly noticed something on the paved road ahead of us.  As we got closer we realized it was a water snake (Nerodia sipedon).  There was a group of three adults walking toward the snake from the opposite direction.  I got nervous and sped up.  I don’t like seeing people react poorly to reptiles and I was worried that one of the adults would scream or attempt to kill the creature when they realized what was in front of them.  I made it to the snake before they did and they continued in my direction.  “What’s that”, they asked.  I told them it was just a harmless water snake and I was very pleased to see that their reaction was one of curiosity.  They asked several questions about snakes and went on their way.  Bill and I released the water snake and headed over to a small stream that had caught our attention earlier.  We walked around the stream and then I noticed another nerodia sipedon sipedon sitting in the water.  I thought maybe I could reach down and grab the snake… after all, the temperature was still pretty low.  Maybe the snake would be cool enough that it would not attempt to rush away from me.  I had not pointed out the snake to Bill because I wanted to surprise him.  He had climbed a hill and was busy looking over the edge into the water.  I got his attention just as I reached in and successfully grabbed the snake.  The water was cold and the snake did not try to move away from me.  What a cool experience!  I have seen several water snakes in the water in Florida but they always rush out of sight the moment they realize they have been seen. 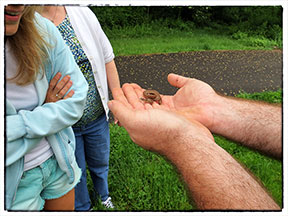 We spent so much time exploring the area near the hotel that we decided to take a drive the next day.  When I am herping in a new area I tend to get in the car and drive until I see something that looks promising.  After we exhausted the area around our hotel I suggested that we head over to New Hope and check the town out.  We parked and found a very nice nature trail.  We walked for about a half hour and then came to another side trail.  It was a really cool area and throughout the day we saw four pretty garter snakes and several ribbon snakes (Thamnophis sauritus).  We also found a little dekayi snake (Storeria dekayi).  It seemed like Bill was spotting the snakes left and right.  He had me beat on this day for sure – I only found one snake.  We even accidently came across a geocache.  I had seen some fresh snake shed nearby so I ran back to get the shed and we put it with the geocache.  I left one of my snakehuntingchick.com cards too.  I thought it would be an interesting addition to the geocache.  After that we continued to search the area a little bit longer.  We walked into a heavily wooded area.  Bill was having so much fun because the area was reminding him of his childhood on Long Island, New York.

While we were in the wooded area we found the lid to blue plastic bucket.  Bill carefully flipped the lid and yelled for me.  I couldn’t remember the last time I saw him look so excited.  “I’m coming”, I yelled back frantically.  I always rush when we are snake hunting and someone calls me over.  There is a momentary thrill in wondering what the person has found.  When I made it over to Bill I saw that he was holding a small salamander.  Wow!  How cool, I thought.  The salamander, and eastern red-backed (Plethodon cinereus), was a new find for me and something that I was very happy to add to my life list.

The days I spent herping in Pennsylvania that summer now exist as fond memories.  I enjoy looking at the photographs from those days; however, the reason that I went to Pennsylvania in the first place – the wedding of my best friend Lisa and her husband Patrick – is really what made the trip worthwhile.  I will choose a field herping adventure over almost anything… but, it is the family and the friends we share our adventures with that truly make them all worth it.  Now, will someone I know please get married in Africa…? Please?